For many people, the current economy has been a challenge, but Elbert, one of our current Stride students, has been able to overcome
In the food industry, Elbert found himself at a dead-end and under extreme situations of stress. “A person can only take so much…, so I needed a career change,” recalls Elbert. His new career choice? Office work. He picked up Microsoft Office for Dummies book and taught himself the computer skills he needed. From here he worked several years in office jobs. His last job with Longs Drugs ended when the company closed their doors. That’s when things got tough. While severance money covered his rent for several months, his job search was turning up fruitless. Eventually money ran out and he lost his apartment and was homeless for about a year. When a family member took him in, his nights spent sleeping in parks and trails came to an end, but his job search did not. His story continues…
“I couldn’t see a light at the end of the tunnel and I was becoming discouraged. I felt like giving up being in my 40s and homeless. It felt like my life was over, but I’m one who never gives up. So I continued to look for a job with no success. I applied with a temp agency and was informed that since I have been out of work for 3 years that I need to establish work experience to secure a position with the agency. After talking to my niece, she suggested that since I had repaired a few computers, I should try to get some type of training. But I needed a job, I needed my life back. I continued looking for a job at the career center, when I ran the Stride Center website and I saw the classes that were offered.
The one that caught my attention was the A+ Technician class. I was very happy and made the call right away to the Stride Center. Carley from the Stride in Oakland made an appointment for me right away, I went to the orientation in October 2011 where I was given information about the class. I went home feeling good about the information that I had received. I then came to the Concord Campus and spoke to Elba. She was very professional and kind. They informed me that I was accepted into the A+ technical class. I cried for a moment because this was like a dream come true. On my bus ride home, I was thinking about how after three years of being homeless, I can now see the light at the end of the tunnel.”
His resilience and can-do attitude inspired Stride Center and Chavez Center staff alike. Navigating through the public transit system, Elbert makes sure he does not miss a class. In fact, he shows up early for his class every day as he puts his all into this training experience.

The Numbers are In!

It looks like 2011 was a year of leaps and bounds at the Chavez Center. Last year the Chavez Center had more programs, partners, staff, volunteers, and donors than ever, which meant that we could touch the lives of more people than ever.  Thank you to everyone who made this year such a success! 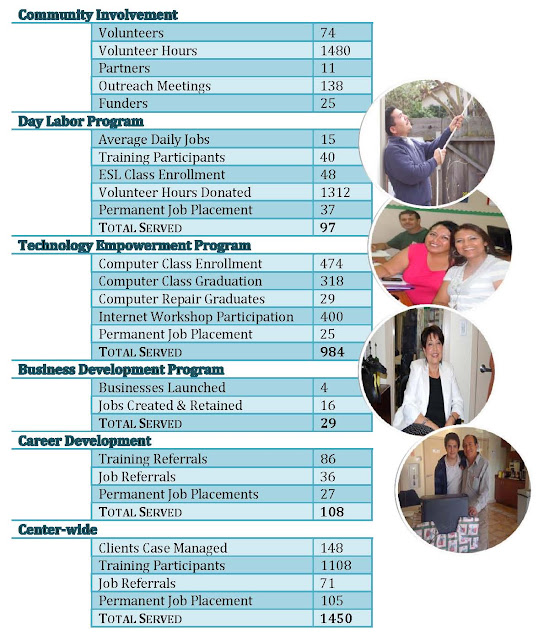 Going for Greatness: Oak Grove Middle at the Chavez Center

A group of middle school students came through the doors of the Chavez Center bringing heart-warming news. With them they had boxes of warm clothing to donate to the members.
On the morning of February 8, a group of students from Oak Grove Middle School, accompanied by their Principal and staff, came to the Chavez Center to donate clothes and to meet our members. After the Day Labor members helped carry in several boxes of sweatshirts and sweat pants, the two groups exchanges some inspiring words.
“It’s hard to find warm winter clothes,” one Day Labor member explained to the group. “And after a day of working, our clothes are often very dirty.” Beyond thanking Oak Grove Middle School for the clothes, the members also expressed how grateful they were for generous people like them who identify with the needs of our community.
Principal Lisa Murphy Oates explained that the theme for the year is “Going for Greatness” and as part of that movement, Oak Grove Middle School is putting in a full effort, doing all they can. As part of this, they want to make it a priority to get students connected to their community. “We want to show our students that it’s important to give,” said Principal Murphy Oates. 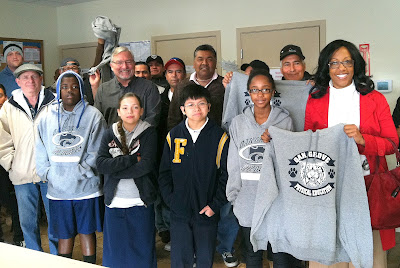 Although this was their first time visiting the Chavez Center, it is not the first time that Oak Grove Middle School has reached out the Chavez Center. In the past they have provided donations to our members. We look forward to building an ongoing relationship as we move forward. We would like to thank Principal Lisa Murphy Oates, Martha Potts, Oak Grove Middle school Students and staff, and the board – your generosity in the community is an inspiration to us.

Email ThisBlogThis!Share to TwitterShare to FacebookShare to Pinterest
Blog Topics: Day Labor Program, Partners, The Change you want to See in the World

Free Tax Return Service is Back

Free tax service to the community! That’s right. Just like past years, the Chavez Center is home to an Earn it! Keep it! Save it! tax return service. Tax professionals are volunteering their time to help our community members file their taxes and get the credits back that you need.