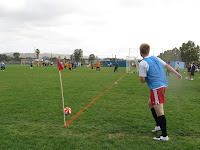 Decked out in brand-new jerseys, Concord Toyota’s team began arriving at Tesoro Fields nearly an hour before their game to scout out the competition. Since 9am Las Montañas and Dolan’s Lumber had been facing off on one field, while Liga Latina and the Concord Police were going head to head on the other. Despite the overcast, windy weather, the intensity and competition were brewing between companies and spectators set up their chairs to get in on the action.  This was the atmosphere of the first ever Contra Costa Cup soccer tournament.

This year the Chavez Center put a fun twist on traditional soccer tournaments pitting companies against each other for some friendly competition.  The short fields made for some fast-paced play exciting for the players and fans alike. 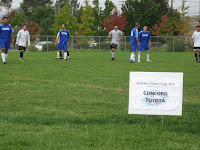 Despite their early arrival and scouting, Concord Toyota’s record was 0-3 for the day.  Their bumps, bruises and sore muscles were testament to their hard play, and their enthusiasm did not dwindle.  “My guys have been out practicing for this event,” said Tony Ciarrocchi of Concord Toyota.  Tony and his team are talking about continuing to play soccer in a league.  “We may have lost here, but this event sparked something.”

Overall the Contra Costa Cup was a great community event all in support of the Chavez Center cause, providing employment connections, computer and job skill training and case management support.  With teams representing the local businesses and organizations, El Ranchero providing much-needed lunch and the many volunteering their day to the event, the Contra Costa Cup was a great picture of the unity of our community.

On behalf of the Chavez Center, we would like to than Tesoro Golden Eagle Refinery for their invaluable support of the event providing security, cleanup and the fantastic venue.

For sponsoring teams for the event, the Chavez Center would like to extend a big thank you to:
Also a thank you to Diablo Futbol Club, Dolan Lumber, and Liga Latina for handling the logistics of the event from the scoring to the refereeing.

We would also like to thank two of the refs from the first game for donating their day’s earnings to the Chavez Center cause.

All of you are helping our community step into a brighter future through your good work.

She moved from Tennessee to the Bay Area and one of the first things she did was search for a nonprofit serving Latinos.  The Chavez Center is proud to introduce our newest volunteer intern, Heather Scholes.

After living in Guatemala for just two months, Heather was moved personally and spiritually to serve immigrant populations.  She saw first-hand the war aftermath, hunger and suffering in Guatemala. She returned to the U.S. and continued working with Guatemalans.  It struck her how after all they had survived back home, they were still struggling with a difficult life here in the U.S.  Back in Chattanooga, Tennessee, Heather continued to work with immigrant groups teaching ESL at a local nonprofit and writing a thesis about immigration to the area. 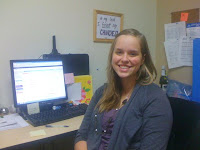 When she learned that she would be moving out to the Bay Area, Heather was unwilling to let her work with immigrants fall aside.  She jumped on board with the Chavez Center and is continuing her work on immigration.  At the Chavez Center Heather is taking the lead on an immigration survey that will determine the great legal needs of our clients.  She is also assisting people in applying for jobs and creating resumes alongside the Career Development program.

Now with us for more than two months, Heather says she already loves her work with the organization.  Unlike some nonprofits in Chattanooga, the Chavez Center has the network to be able to refer people to the right places to address their needs.  “That’s what drives me,” says Heather, “Seeing what we can do to help the community.”

When they called it a grant award celebration, they were not joking.  Each organization arrived with staff, board and clients.  The tables were decorated, the food was abundant, and, most of all, the enthusiasm was limitless.  Alexia Salvatierra stepped up to be the first speaker at the event, and the tone she set was nothing short of inspirational.  Her challenge to bring social justice through love resonated through the room with nods and amens from the audience reaffirming her message. 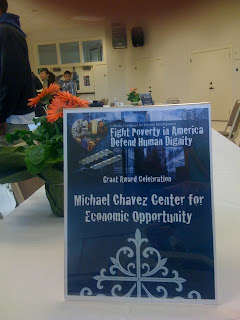 This is the scene that Catholic Campaign for Human Development (CCHD) and Catholic Charities of the East Bay create when they are celebrating grant awards.  Yesterday, the Chavez Center sat among those organizations celebrated and supported by CCHD.  The sense of community support for those people so often overlooked was apparent.  Organizations supporting disabled, homeless, downtrodden, and unemployed were all among those awarded.  And the funds, where did they come from?  From one annual offering held in November.  That’s right, all of you helped make this funding possible. Thank you to everyone out there who is supporting CCHD.

The funding from CCHD will go to develop the Bedbug Home Services business that the Chavez Center helped develop earlier this year.  There are two-sided benefits for this program as clients receive a service they wouldn’t receive otherwise while the business provides the members with an income stream.  The project improves the quality of life for residents and workers alike.